This Diy Pom Pom Mobile has the most lush, fluffy and compact pom poms imaginable! They are so juicy you want to bite them! After many homemade pom pom attempts using cardboard I wasn’t quite satisfied with the end result. Luckily, I found these incredible Japanese Pom Pom makers and I can whip them out in minutes. I found it so relaxing to make Pom Pom’s while watching a movie, you can put the pom pom maker down and come back later and nothing comes apart. It’s very user-friendly and you can wrap the yarn around the pom pom maker without much attention. In this tutorial I’ll teach you exactly how to get those *POW* Pom Poms you crave. This mobile makes a fantastic statement piece in your home. Perfect for a baby nursery or a Baby Shower for a special gift that will create a unanimous wow. I used this great quality multicolored wool I found called Mandala that was the perfect amount for one mobile for around $3 for a huge ball.

I’ve provided links for your ease, if you order from them I’ll receive a small commission which helps keep the site up- Thank you!

First pick out the colors you would like to use. I made mine for a baby boy’s nursery so I used different shades of blue, aqua, grey and white. The baby lived near Whistler, B.C so I wanted to reflect the shades of the mountains and the ocean ( and a bit of grey for the rain!)

Note: Your going to be making 6 medium and 6 small pom poms by wrapping the yarns around the pom pom makers ( I used the green and yellow sizes in the pack) So while your making one to the next, try to balance the colors by keeping the finished balls together on the table for visual reference.

Now if your using a multi colored or ombre ball of wool it helps to unwind it , cut and group the different shades together. The Pom Pom maker has a top and a bottom arch. Below you can see that I’ve grouped the same amount of wool for both sides. You can simply wrap the wool around two fingers 20-40 times depending and cut. Then they are ready to wrap and wrap and you’ll always have them color balanced.

To start open the pom pom maker and wrap tightly the first color on both sides.

Continue with the second color, starting at the middle and making sure to cover the first layer of yarn.

Add the third color in the same way. You can see it’s starting to fill over the edges.

Now add you final color and its going to be quite full! Thats what you want, it will make a very fluffy pom pom. Don’t worry about the bits of yarn spilling over, once it its closed you won’t see that.

Take a very sharp pair of sewing scissors and cut the top and bottom.

Take a piece of yarn and tie to the center of the the pom pom maker very tightly, then turn the yarn around to the other side and tie a tight knot.

Now open the pom pom maker and the pom pom will pop out. It will look shaggy and that may be the look you want, just a little trimming is needed in that case. The art of the very compact pom pom is in the trimming down so have a look at the image below.

To trim you simply cut, cut , cut on an angle all around until you have your desired pom pom look. Since this process makes a lot of yarn dust, its best to do this with a cardboard box over your lap then empty it out when all the balls are trimmed. I usually make all the pom poms first then do all the trimming later. I usually cut for about 5 minutes each pom pom, shaking and fluffing it up in my hand, then cutting some more.

Now for the really fun part! Grab your stick, I found this great sun bleached one on the beach! Line up the 12 pom pom’s into 3 rows:

You can play around this way with the colors until you get the right look.

Now thread your baker’s twine into a large needle and tie a knot at the bottom. Leave generous room as you’ll be stitching the pom poms in place then wrapping the bakers twine around the to the stick several times before tieing.

Start with the first row vertically. Stitch the bottom pom pom into pace a few times so its secure and anchored.

You want to leave the same distance between each pom pom thought the mobile, so decide that part now when you attach the second pom pom. Once again stitch it a few times, you want it to be very secure so it does not slip down.

Continue with the next two balls until you have a finished vertical row. Start the second row and use the first row as your spacing guide.

Continue until all 3 lines are completed and lay them all together side by side.

Lower the middle row so that it gives the mobile more movement to the eye. Wrap around the stick 5-8  times and tie the Bakers twine tightly.

Cut off the excess string.

Now tie on each end the string that will hold up the mobile.

Completed, so satisfying right!?  This DIY project will get at lot of attention from your friends! Now that you got the first mobile completed the second should take you half the time.

Love this… but rather that I make it for you? I do special orders on ETSY-Click Here! 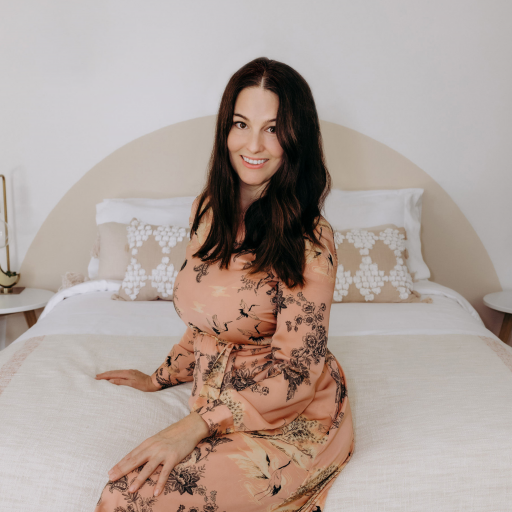 If you are planning to start your hosting adventure, or are a seasoned host, you're in the right place! Mamma Mode is a place for hosts to elevate their hosting game, increase bookings and spark creative ideas!

Airbnb Welcome Book | How to Create the Perfect Guestbook

Airbnb Cleaning | 7 Things you Forgot to Clean, That Gross Out your Guests

How to Make your Airbnb Eco-Friendly

My original and #1 selling Host Bundle has gone ME

Airbnb mood board ideas on the blog today! Link in

Looking for the best Amazon items to level up your

Do you have a welcoming, well-lit, seamless check-